How many times do you find yourself grabbing for your paddle after making a cast to try and correct your position so you can make that perfect presentation to the fish that wait below. I know that it has been done a few hundred times just on one trip, but there is a product out there by Backwater Paddle Company that can make things easier for you. The Piranah hand paddle that they make is not only easy to use but it is very quiet when you are trying to correct your position. I have used it on three trips now and it did take some getting use to but not by any fault of design but trying to remember to quit reaching for your paddle. Now I just lay the paddle down and use the Piranah to move around and position my kayak. The hand paddle comes with a strap and the paddle will also float if you accidentally drop it into the water. It sure has made my kayak positioning so much easier now that i’m using it. The price is right for such a great add on to the gear that you already have. I now have two of them which are kept on either side of me for easy access. 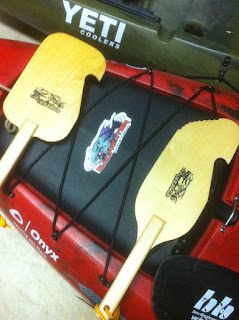 Sign up and leave a comment to be in the drawing to win one
Posted by Texas Fly Fishing Adventures at 6:20 PM 9 comments:

San Marcos river, on the eve of Halloween

Took up an open invite today to fish a section of the San Marcos river that i've never fished before. With the temperature in the 40's this morning I put my waders on before launching the kayak into the moving green colored river water.
When fishing new water I try to fish fly only but brought along a baitcaster not knowing what the fishing would be like after the first cold front of the year. Started the morning tossing a small popper around all of the current breaks and anywhere I could find pads along some edge breaks.One of the guys on this trip is a seasoned fly fisherman who travels around guiding out of different states and had just returned from Alaska. It's nice to watch someone make what is a struggle and continuing learning experience for me look so easy. At lunchtime I had Ryan watch me cast and he said that for being new to fly fishing that I was ahead of the curb, not bad.
We caught many fish today with both Ryan catching a Guad hybrid over three pounds and Danny catching a nice five pound largemouth. There were also a few funny stories to tell.
A couple came through while we were getting ready to leave a sandbar after lunch and we watched as she flipped after hitting a tree while going through a chute. After helping out they were back on the water and when she turned the bend, two bucks jumped from the cliff into the river almost hitting her as she was paddling. Wish the recorder would have been on to capture it as it was a sight to see.
I set the hook on a fish that pulled me upstream in the kayak. The fish turned me around a few times before getting into some cypress roots and coming off, all I can figure is it must have been a giant alligator gar. Or, a river monster...
Had a great time and made some new fishing friends today. Caught a lot of fish and saw a lot of strange things, hmmmm Halloween.