Was able to get out and finally test out the new Matthews Fly Rod on Saturday. I was wanting to try a different section of the river but even with the water as low as it is and the temperature being well over 100 degrees it amazed me how many people were camping and playing in the river. With this section being full I headed to the area where I fish most of the time. Got there and launched the Coosa into a river with it's dark green tinted water. Visibility was only a few feet down which played into my favor making the fish less spooked.
I added a Solitude 3/4 reel to the fly rod and loaded it with some Rio 4wt trout WF line to match the 4wt rod. The rod cast great and I was slinging the fly all over the place. Did good this trip, only lost two flies.
The Solitude reel worked great. The drag system on it does what it's supposed to do and is smooth.I also like the offset mount, it made it more comfortable to hold.
Didn't catch many large fish but I caught a lot of fish, had a lot of fun and saw a lot of big fish cruising around that would probably bite later in the day or early in the morning.
Most fish were caught on a wooly bugger and clouser, that were stipped in at a medium pace.
Don't know about you but i'm ready for some cooler weather.

First Bass from on the new rod and reel 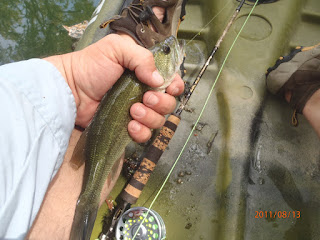 Posted by Texas Fly Fishing Adventures at 12:18 PM No comments: