Redfish in the Big Easy

Headed out Friday morning for what would be a 10 hour drive from my home in Texas to my cousin's home in Bay St Louis, Mississippi. Went through some heavy rain showers which was a complete reversal of anything that you would see back home this year. I wasn't even sure if the wiper blades would hold up after the fifty plus day's of 100 degree heat, fortunately they worked.
The way the trip was planned there would only be one chance to get to the marsh in Louisiana and try to catch my first redfish on a fly. Took along the 7wt TFO BVK loaded with 8wt WF line, sixteen pound redfish leader and sixteen pound tippet. Picked up a few shrimp immitation streamers, spoon, and a few topwaters to try out. 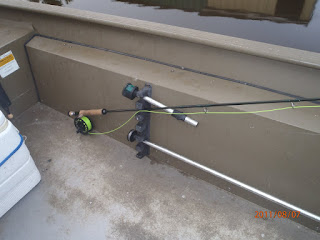 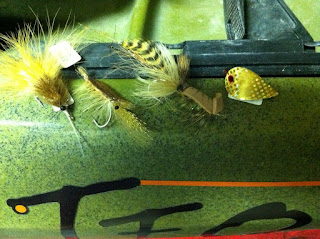 Spent the day Saturday visiting with family and attending my Uncle's 80th surprise birthday party.
Woke up Sunday and made the hour drive to New Orleans to pick up my friend Perry for a day of fishing. We made it out to Myrtle Grove by 10:30 in the morning and proceded to take the boat off the lift and load it up to head out. The water was pretty muddy from all of the rain with about 8in of clarity. 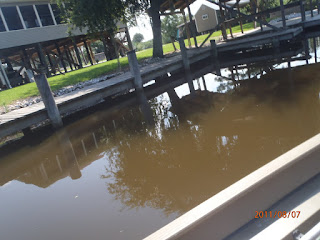 Started out throwing a shrimp immitation streamer and had a really hard time getting any distance out of it. Being new i'm really not sure if the setup was correct for tossing this heavier lure. After no action for awhile I went ahead and put on a popper that gets some action when out bass fishing. Was able to throw normal with this smaller fly. Any suggestions on what you think that I might be doing wrong would be appreciated.
The wind picked up with all of the storms around us and we paid close attention to the lightning by moving around to different areas whenever a storm got close. I have a picture of a water tornado that could be seen in the distance but not sure if you will be able to make it out. Pretty cool to see though.
Put the fly rod down and picked up the baitcaster with a jig head and croaker imitation soft bodied lure on it. Didn't take long to get my first keeper in the boat. 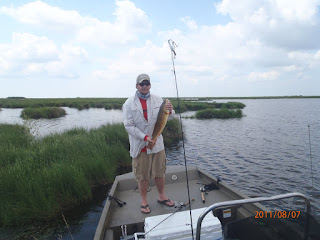 Not to long after that one Perry hooked into a nice 27in red and the fight was on. 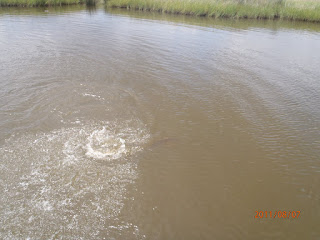 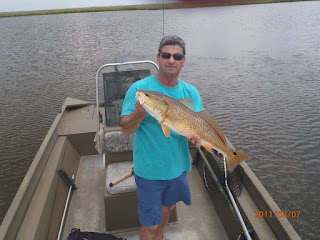 We struggled to find fish all day, but with an hour of daylight left the tenth redfish went into the cooler. I ended the day with a nice 27 1/2 inch red. Lost a limit during the day and had a huge red fight me for a good five minutes then come off when the hook straightened out. That was a first for me. 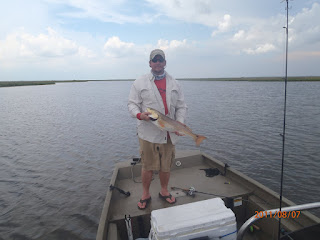 Eight of our ten fish limit 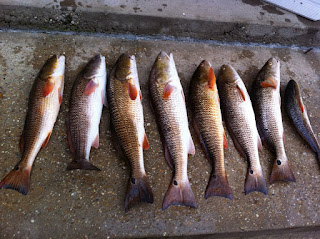 My two largest on the day 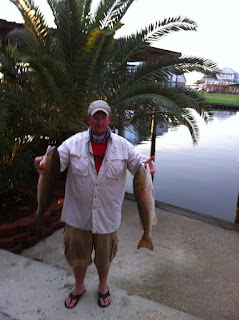 Want to thank my cousin for putting me up for a few days and thanks to Perry for getting me out on the water. Had a great trip and will do it again next year.

Posted by Texas Fly Fishing Adventures at 12:31 AM No comments: