As I was on my way home it dawned on me that all of my gear was in the back of the truck and if I hurried maybe the fish would be biting as the sun was due to start setting soon. Threw on the waders and boots then scrambled down the hill and into the river. Instantly it looked promising, as trout began to rise and sample the offerings drifting along the surface of the river. Put on a Popcorn Midge from
Dragonfly Angler  and waded upstream to a little set of rapids. It didn't take long to produce the first rainbow of the evening as the fly drifted through the current and slowed in the eddy behind the rock I could feel the tension as the trout ate the fly. After a good battle I was able to convince it to get into the net for a photograph. 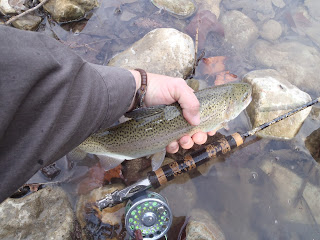 As the sun began to set I came acrouss two nice sized trout that held still long enough for a picture as well as a Palimino that allowed me to get to within five feet for a picture. As they say, good things come to those that are prepared. Nice way to start off the year.