I guess if you are going to call it a freeze trip, you might as well have a freeze during the trip. This was the third annual trip between a group of eight friends and the eleven others that attended through an open invite on a forum. We met Saturday morning at 7:00 in 28 degree weather with the promise of warmer temperatures to come during the three day excursion. After unloading and doing a shuttle we were on the water before 10am and starting our 8 mile paddle to the first nights camping island. The water was at it's usual winter time depth and very clear with the only flow being from elevation changes. It didn't take long to figure out a pattern. You had to have a depth of greater than three feet and some sort of current, when you found an area like this you would work it hard and be rewarded with quite a few nice sized largemouth bass and some nice hybrids (cross between a Smallmouth and a Guadalupe bass). 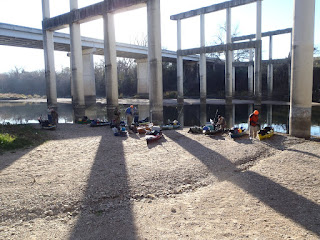 Not knowing what the fish would be interested in I took a baitcaster as well as the 7wt TFO BVK. Unfortunately the bite was tough on the fly rod and most of the fish came on a Dinero plastic worm. 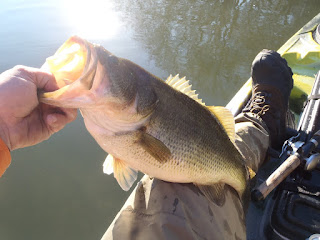 After arriving at the island and setting up camp we fixed dinner of fresh Grass-Fed Ribeye steaks and beans. We spent some time around the fire swapping stories as the temperature started dropping, as I made my way to the tent there was dew everywhere and you could tell that it was going to get cold. And cold it got, we awoke to everything being frozen. My waders and boots were frozen stiff, that was the coldest night that I have ever spent in a tent and I will be better prepared for it next time. After breakfast and packing we would be in for the longest leg of the trip which would be a 13 mile paddle and try to get some fishing in. The pattern stayed true for the second day and many more nice fish were caught. We reached the island as darkness approached and huried to set up tents and get a fire going. After a repeat performance for dinner it didn't take long before people started to turn in for the night. The weather had changed again during the night and actually warmed up enough that it actually got warm inside my tent. Upon waking up in the morning we ate and took our time as today would be a short paddle of only a few miles. We spent more time on this leg of the trip just floating and discussing how much fun was had over the last few days and discussing plans on when we could get together again. I really enjoy these trips whether I catch fish or not because of the time that I get to spend with some really good friends as well as the new friends that I make. With that being said it was nice to catch the amount of fish that we did.
Stay FISHY my friends.

Posted by Texas Fly Fishing Adventures at 2:07 PM No comments: