What, I actually won something.........that thought went through my head as the message was waiting for me on Facebook for winning the William Joseph Tsunami bag. Having looked for a water resistant bag for the rear deck of my kayak for awhile, I was curious to get this and see how it would fit. I've been looking for something other than a dry bag for the rear deck while camping from the kayak. Something that would be easier to access and still keep water out.
When the Tsunami bag arrived it was immediately placed on the back of the kayak butting up to my K-2 cooler, perfect fit.

The next logical thing to do was to pack some items that I would normally want access to during the day and see how they would fit. One of the cool things that I noticed upon opening up the pack were the two hard dividers that are held in place by velcro. Your choice to use or not as well as where to place them in the pack.


I proceeded to put in my Fishpond guide pack and the two dry boxes that I use to hold electronics as well as wallet and other important gear that are needed on trips. Then added the cooking set, I don't think it will normally travel in the bag but it was a good reference to show off the amount of space that the bag has.
﻿ Here is a shot of the gear that was put inside for reference.... 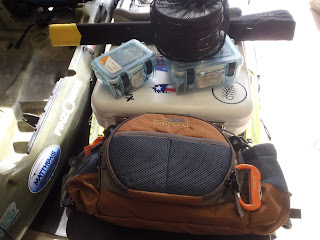 Seeing how nice the bag was it made me curious.....how functional could this be.
I bet Willy J had no intention of this being used as a stripping basket while wading...but it works. 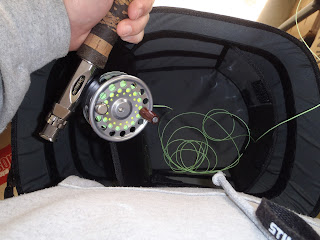 ﻿
To see more of their products go to William Joseph Fly Fishing
Posted by Texas Fly Fishing Adventures at 5:51 PM No comments:

Finally, the rain has been falling here in Texas and giving water to the rivers and lakes that is much needed. As I got to the bottom of the hill the difference could be seen as I watched the off colored water flow in places that were once dry or had a small amount of water. 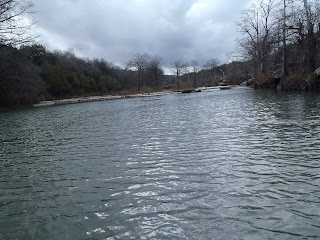 I tied on an indicator and drifted a nymph through some stretches without any luck, as I worked my way downstream the flow picked up and I took the indicator off and caught a few bows in the faster moving water. 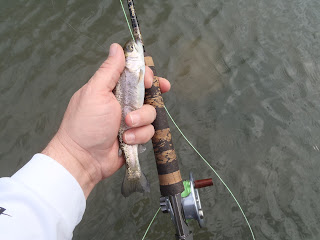 My time on the river was cut short with the rain starting to fall. I don't mind the rain but it was the lightning that ran me off the river. Don't mess with Mother Nature.......

Posted by Texas Fly Fishing Adventures at 10:42 AM No comments: